skip to main | skip to sidebar

Whichever group let off the bomb that killed 50 innocent people in Damascus yesterday cannot possibly have the interests of the Syrian people at heart.

They are acting in their own interests, driven by fundamentalist ideals, frustration, thirst for revenge and callous disregard for innocent human life.  Going after soft targets is both savage and cowardly. They do not have the courage to confront the Shabiha thugs or regime militias directly so they kill scores of men, women and children to destabilise the regime, as if the regime ever cared for ordinary people.

Both the Assad Clan and these brain-washed and foreign financed jihadis have lost any moral authority or the right to hold a Syrian passport.  The suffering Syrian population will be more than happy to see these two groups of savages eventually destroy each other.
Posted by Philip I at 6:33 AM 205 comments:

Good riddance to those who turned their guns on the people

Only three top regime criminals have perished in the suicide bombing in Damascus today .Whose turn is it going to be next?

Syrians are regaining their freedom the hard way - through blood and tears.  Russia has its own strategic interests in the region and (like other governments) could not care less for the torment and violent deaths in Syria.  Syrians should nevertheless be pleased that Russia has thus far prevented Western military intervention, which would have resulted in more deaths and destruction and culminated in the installation of a fractious  puppet government. Russia is  however becoming less and less relevant as more senior regime figures defect or are assasinated.

The risk of Western intervention is increasing by the day. The excuse will be to safeguard the stockpiles of chemical weapons. No doubt Mr Putin will start panicking soon and be forced to accept the compromise that Obama offered him in the first place - a more representative Syrian government that will preserve the "special relationship" withn Russia.

If Putin does not give way on Syria now, Iran could be attacked after the US presidential elections. Russia would then risk losing its remaining influence in the Middle East completely and comprehensively.

The silent minorities in Syria (decent Alawites, Christians, Kurds, Druze and others) should now rise up against the regime or risk being totally marginalised or even persecuted after its collapse. Those who are risking their lives today will want to run the country tomorrow. Unfortunately for them, and like in Egypt, those who end up running the country are not those who have risked their lives but the more organised and clandestine political opportunists who are happy to climb the mountain of dead bodies to reach the top.

A truly just and democratic government can only be born out of a fully representative popular uprising.  Justice and democracy for all have to be earned by all.

The Alawites' bloody retreat into own enclave

The Alawites (a branch of Shia Islam) had a state of their own in Syria's coastal region for 12 years after the collapse of the Ottoman Emipre (see 1920s map). They even issued their own postal stamps (see pictures). 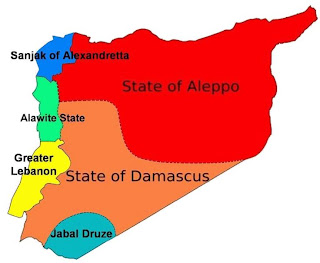 The French who seized and colonised "Greater Syria" from 1922 to 1943 helped to create several mini states from previously semi-autonomous regions including Lebanon (with its Christian, Druze and Shia Muslim majority at the time) and an Alawite state along Syria's coastal strip. The latter was re-integrated into Syria in1936. This divide-and-rule strategy was essentially designed to keep the "fundamentalist" Sunni majority at bay in the rest of Syria.  Nationalist Alawites, Sunnis and Christians refused to join the Troupes Speciales du Levant that later became the Syrian army, so the French recruited mostly poor Alawite peasants who had been marginalised and mistreated by the rest of the population. These Alawites gradually worked their way up through the ranks and eventually took power in Syria, led by Hafez Al Assad in 1972. 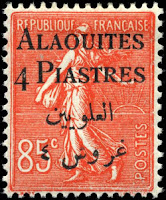 The Alawite army/security/militia-based  dictatorship consolidated its rule over the country by co-opting wealthy Sunnis and  minorities, and sharing the pie with them,  and hiding behind a false non-sectarian Arab nationalistic agenda  while at the same time aligning itself with Iran and the Shia of Lebanon (Hizbullah). 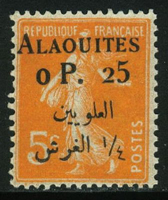 Now that they have shot themselves in the foot and at risk at being exterminated by a popular uprising (which is supported by other Arab states that are fearful of Iran) the Alawites are beating a retreat towards their enclave. They have been moving heavy weapons, missiles and sophisticated air defences into well-camouflaged spots and tunnels in the Alawite mountains and ethnically cleansing the surrounding areas as they do so.

It is unlikely that Syria will break up again into mini states. Many of the 2.5 million Alawites are strongly loyal to Syria as a nation-state and wise enough not to allow the Assad ruling family and its cronies to lead them into the abyss in desparation. Russia is not foolish enough to allow a ruling gang to fragment the country and re-create an Alawite state. Despite all the theatrics and political machinations on the world stage, a deal has already been struck between the Russians and Americans to bring the Assad regime to an end without endangering the delicate balance of power in the region.

In the end the Russians and Americans will have to pick up the pieces and help to re-construct the country. In the cold light of day, the civilian death toll (large and ugly as it is) still looks to them to be a cheaper option than direct intervention. They will intervene when the senseless revenge massacres against Alawites start and before the regime loses control of one of the largest stockpiles of chemical weapons in the world.

Philip I
Syrian Roman Emperor (AD 244-249) I have been dead for a long time but my imperial spirit lives on. I want Syrians to rule the world :) But first, Syrians must learn to rule themselves!